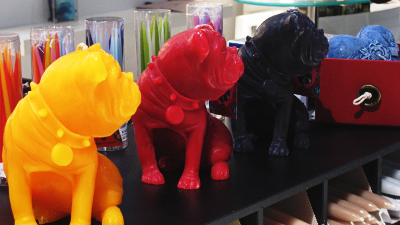 Yes, it’s late January, and the New York International Gift Fair (Winter 2012) rolls into midtown Manhattan, New York. ‘The NYGIF‘ is the largest gift-related trade show in the United States. nyigf.com, the official site for the Fair, describes the event as follows:

“Drawing 35,000 attendees from all 50 states and 85 countries, the NYIGF is produced twice annually by GLM Shows and is open to the trade only. Held in January and August in New York City, the Fair hosts 2,800 exhibiting companies showcasing the very best lines across the home, lifestyle and gift spectrum.”

This blogger (@nycework) had the privilege of helping Prestige Identity’s Sion and Harvey with booth setup at the Fair. Prestige Identity is a company based in Los Angeles, California, whose market niche is elegant, European-imported gifts for men and women.

If you plan on attending the Fair, treat yourself to a whiff or two of Prestige Identity’s newly added collection of scented candles from Bougies La Française, a European candle manufacturer that has been in business since 1902. You can find Prestige Identity’s showcase at Booth 2334. Drop in and say hello to Sion and Harvey.

Hooray! @nycediapers’ avatar for Twitter and other social networks is here.

Nycework Has a New Avatar

Nycework has a new avatar. Thanks to babbagecabbage for the photograph I cropped for the old avatar.